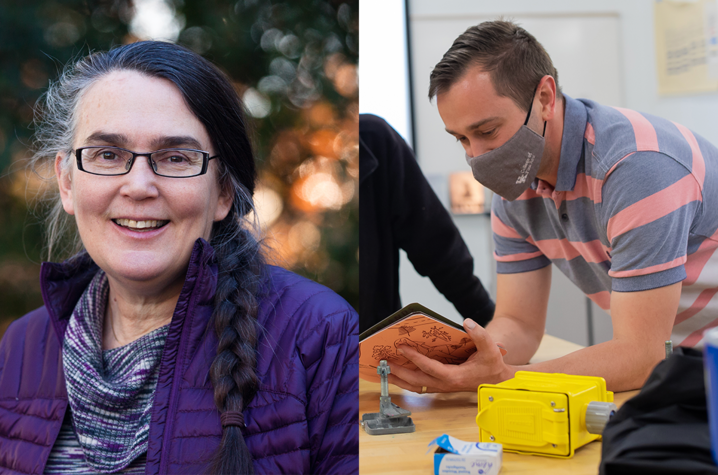 Susan Gardner, professor in the Department of Physics and Astronomy in the UK College of Arts and Sciences, was presented the 2022 Albert D. and Elizabeth H. Kirwan Memorial Prize. The prize is bestowed each year to a faculty member in recognition of their outstanding contributions to original research or scholarship, with an emphasis on work produced four years prior to the award.

Jonathan McFadden, associate professor in the School of Art and Visual Studies (SA/VS) in the UK College of Fine Arts, was presented the William B. Sturgill Award, an honor given each year to a graduate faculty member who has provided outstanding contributions to graduate education at UK.

Gardner and McFadden were recognized at UK’s annual Faculty Awards Ceremony on April 21.

Gardner is a theoretical nuclear physicist in the UK Department of Physics and Astronomy, with broad research interests and a long publication record spanning the fields of nuclear physics, particle physics and astronomy.

“Over the course of her distinguished 27-year career at UK, Gardner has developed an international reputation not only as an extraordinarily creative and original theoretical physicist, but also as an international leader in the field, bringing considerable attention to the department and UK,” said Bradley Plaster, chair of the UK Department of Physics and Astronomy in his nomination letter. “As one of only a few women in her department, Gardner has also served as a trailblazing pioneer for women in physics, a discipline which has lagged significantly behind other STEM disciplines in the percentage of women who have earned degrees and subsequently risen to faculty positions.”

Early in her faculty career, Gardner wrote several influential theoretical papers (in the top journals in the field; now with hundreds of citations) which shaped the course of experimental work by thousands of experimental physicists. In recent years, she has focused on proposing novel, new ideas for searching for new physics beyond the Standard Model. With her collaborators, Gardner proposed a novel “fifth force” (there are four known forces in nature: gravity, electromagnetism, the weak nuclear force and the strong nuclear force). This work has been highly cited since it was published in 2016 and 2017 in the two premier journals in the field.

Gardner has also recently expanded her research portfolio beyond the fields of nuclear and particle physics. Since 2017, she has published a series of papers in the premier astrophysics journals on evidence for asymmetric ripples in the interior stellar disk of our Milky Way galaxy, previously thought to be smooth.

Gardner’s long and distinguished track record in nuclear physics has also culminated in many honors and awards. This includes being named a University Research Professor for the 2019-2020 academic year; a Fellow of the American Physical Society in 2013 (reserved for the top 0.5% of the Society’s membership, excluding student members); and being continuously funded by the Department of Energy since 1996.

Jonathan McFadden is an associate professor in the UK School of Art and Visual Studies (SA/VS). He has been at the university since 2013, during which time he has mentored and advised countless graduate students. Additionally, he serves as graduate advisor for SA/VS and teaches the graduate seminar for all Master of Fine Arts (MFA) students.

“Dr. McFadden has a real desire to work closely with and effect change in the lives and careers of our MFA candidates,” said Ruth Adams, acting director of SA/VS. “Year after year, there have always been students in the pool of incoming candidates who applied to our program specifically to work with McFadden. It is his reputation as a respected teacher and mentor, with colleagues at other universities and through his professional organizations, that generates this incoming candidate pool.”

One of those students is Marika Arellano Christofides, an MFA candidate in SA/VS who will graduate this May.

“In my three years at the School of Art and Visual Studies, Professor McFadden has invested deeply in my professional development,” Christofides said in her nomination letter. “He consistently encourages all of the graduate students to apply for exhibitions, residencies and conferences — often sharing specific opportunities as he finds them.”

Todd Herzberg, an assistant professor of art and design at Murray State University and 2018 UK MFA graduate, says McFadden was his primary advisor, professor and mentor at UK, who worked with him and his classmates to prepare for success after graduating.

McFadden holds an MFA in printmaking from Edinburgh College of Art, a Bachelor of Fine Arts in printmaking and a Bachelor of Arts in French from Texas State University. His work has been exhibited at the National Gallery of Scotland, Royal Scottish Academy, University of Texas-San Antonio, University of Wisconsin-Madison, University of Minnesota, 621 Gallery (Tallahassee), Salisbury University, Highpoint Center For Printmaking (Minneapolis), Wichita State University, Millsaps College, 55 Limited (Berlin, Germany), Spartanburg Art Museum (Spartanburg, South Carolina) and many other national and international venues.

He has also been an artist-in-residence at the Highpoint Center for Printmaking, 55 Limited, Anchor Graphics at Columbia College, the Prairie Center for the Arts, and Cove Park.

The Kirwan Memorial Prize was established in 1995 and recognizes its namesakes' collaborative research efforts, as well as Albert Kirwan's endeavors in creating an environment at UK that promotes high quality research and scholarship.

Serving as head football coach from 1938 to 1944 and later dean of men, "Ab" Kirwan was a distinguished faculty member and scholar in the field of Southern history, dean of The Graduate School and served as university president from 1968 to 1970.

Elizabeth Kirwan was awarded the Sullivan Medallion in 1973 for her service to UK and the Lexington community. She held executive roles across more than 10 organizations, including president of the UK Woman’s Club and chairwoman of the Lexington Parks and Recreation Board.

Established in 1975, the Sturgill Award is named in honor of alumnus William B. Sturgill, who contributed to higher education through organizing and serving as president of the Hazard Independent College Foundation, in addition to working with legislators to develop the community college system across the Commonwealth.

Sturgill, who died in 2014, was born in Lackey, Kentucky, and graduated from UK in 1946. He was involved in a variety of businesses, including executive and owner of several coal operations, East Kentucky Investment Company, Fourth Street and Gentry Tobacco Warehouses and the Hartland Development Project. Sturgill served as both secretary of energy and secretary of agriculture under Gov. John Y. Brown Jr.  He served 18 years on UK's Board of Trustees, including serving as chair for 10 years. The Sturgill Development Building is named in his honor.

For more information about the awards, visit https://gradschool.uky.edu/faculty-awards.