My Research: Paradoxes in NGC5548

In collaboration with scientists at Space Telescope Science Institute, we work on understanding the abnormal behavior of AGN NGC5548, in which the soft X-ray continuum was heavily obscured by an obscurer. This obscurer made the emission and absorption lines go on a “holiday” and no longer behave such as they were expected to behave. This phenomenon accounts for a paradox that the standard models cannot explain this phenomenon. NASA committed time on 6 space-based observatories, XMM-Newton, Swift, NuSTAR, INTEGRAL, Chandra, and HST, to conduct an unprecedented observing campaign on NGC 5548. There are also 6 ground-based observatories which had been used to gather data from this object. The result of dedicating 12 observatories to track NGC5548 is a huge pan-spectral (IR through X-ray) data set.

To find an explanation for what had happened, we need to predict the behavior of the black hole and the obscurer considering a lot of possible scenarios. We mainly use the data taken by Hubble Space Telescope and simulate the holiday that happened in the lines. To be able to model and predict this phenomenon we need a tool to do numerical calculations. Cloudy is the tool that we use. We produce models of the emission and absorption lines and the obscuration and adapt Cloudy to fully model what we observed, improving the code. As a Cloudy developer, I will incorporate these improvements into next releases of the code. This will benefit other researchers in the field and future space missions, as well.

Cloudy is, in fact, a spectral synthesis code designed to simulate spectra from interstellar matter possibly exposed to an external source of radiation under a broad range of conditions. Cloudy simulates gas ranging from fully ionized to molecular. This makes it possible to predict many observed quantities by specifying only the properties of the cloud and the radiation field striking it. The code is being developed here in Lexington and is publicly available under an open source License which has a 2-year release cycle. Right now, people all around the world have free online access to C17 which is the version released in 2017. The developments from my research will be implemented into future releases of Cloudy. 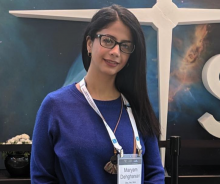