LEXINGTON, Ky. (July 27, 2022) — Two University of Kentucky students have been selected for the Henry Clay Internship at NASA for the 2022-23 academic year. The internship offers an exceptional opportunity for highly accomplished students to serve in the NASA Office of the Chief Scientist.

NASA’s chief scientist serves as principal adviser to the NASA administrator and other senior officials on agency science programs, strategic planning and the evaluation of related investments. The Henry Clay Internship with this office is sponsored by the Kentucky Society of Washington in partnership with the NASA Kentucky Space Grant Consortium.

The UK students are:

McElhannon, the daughter of Mary and Ernest McElhannon, became interested in physics and astronomy as a child, growing up with her family in the woods.

“There was only one spot near us where we could see the sky through the trees — on a hill down the street,” she said. “My family used to walk there on clear nights to watch shooting stars and talk about the little astrophysics we knew at the time. It only felt natural to learn everything I could. Once I read all I could about space, I began on classical mechanics, and everything snowballed from there!” 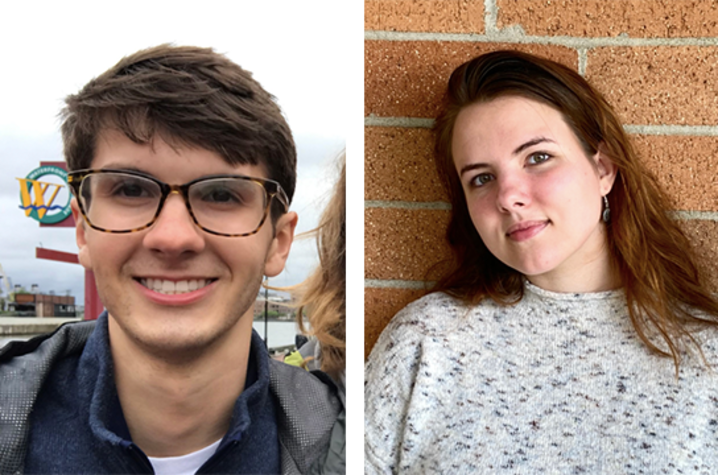 conducts research on nonradial pulsation of RR Lyrae variable stars under the mentorship of Ron Wilhelm, associate professor and director of undergraduate studies in the UK Department of Physics and Astronomy. She acknowledges Wilhelm for aiding in her success at UK, along with Professor Chris Crawford, who recommended her for the NASA internship. She also credits her high school physics teacher, Mark Rush.

“He changed my life completely,” she said. “I have never been the smartest student in my classes, but he encouraged me to follow my passion no matter how difficult it was. I don't know where I would be without him.”

Last summer, McElhannon participated in the Research Experiences for Undergraduates.at UK. Her work was titled “Research in Symmetries,” which introduced her to the research process and the physics community.

She said the Henry Clay Internship will allow her to explore not only the research aspects of her physics major, but also the policy aspects.

“The world of physics involves much more than discoveries; it involves the responsibility to handle the discoveries responsibly,” McElhannon said. “Every aspect of physics fascinates me, so the ability to explore all of them at once is incredibly exciting.”

After she completes her UK degree, she hopes to attend graduate school to obtain a doctoral degree in physics or astrophysics.

The Office of Nationally Competitive Awards assists current UK undergraduate and graduate students and recent alumni in applying for internships, external scholarships and fellowships funded by sources (such as a nongovernment foundation or government agency) outside the university. These awards honor exceptional students across the nation. Students who are interested in these opportunities are encouraged to contact the office well in advance of the scholarship deadline.