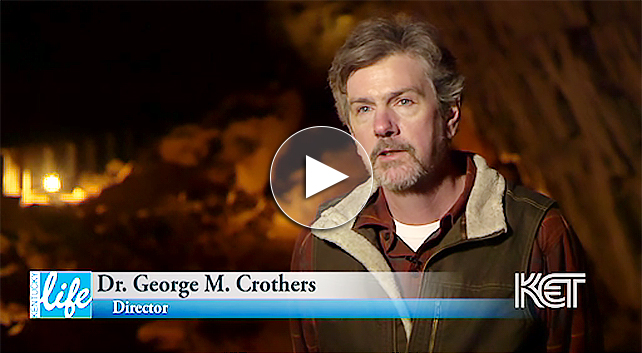 George Crothers, a University of Kentucky expert in prehistoric archaeology, has spent the better part of 30 years in the shadow-draped, surreal underworld of Kentucky’s Mammoth Cave system, searching for prehistoric as well as historic treasures of humanity’s adventures underground.

Although it’s one of those never-quite-finished projects — there are hundreds of miles of underground labyrinths and chambers, after all — the UK associate professor of anthropology in the College of Arts and Sciences said much of his work and an extensive trail reconstruction project has been completed, in time for this year’scelebrations marking Mammoth Cave National Park’s 75th anniversary, America's National Park Service’s 100th anniversary, and the bicentennial of the beginning of guided tours in “the Monarch of Caves” in 1816. The park was designated a World Heritage site in 1981.

Recognizing his expertise as well as his familiarity with the caves, Crothers and Steve Ahler, director of UK’s Program for Archaeological Research, were invited two years ago to take part in the National Park Service’s ambitious $5.5 million renovation, refurbishment and preservation program of cave trails — the largest in-cave construction project Mammoth Cave has seen since it became a national park.

“The project has been about preservation as much as renovation,” said Crothers, who is also director of UK’s William S. Webb Museum of Anthropology.

In 2014, a year before the National Park System’s trail reconstruction began, Crothers and a UK support team of staff and students surveyed the anticipated construction area in search of historic and prehistoric materials scattered in passageways and buried along the trails. These surveys would eventually guide the construction crews away from sensitive areas.

Crothers was also assigned to conserve and preserve the 200-year-old log pipes and wooden leaching vats that make up the cave’s abandoned saltpeter mining apparatus. The old mining equipment his team found and treated remain in situ, where they were originally installed in 1809 to process cave sediments, rich in nitrates used in the manufacture of gunpowder.

The National Park System’s Mammoth Cave Trail Project has turned two miles of packed-dirt and gravel-and-dirt trails — many marking traces originally blazed by prehistoric miners as much as 5,000 years ago — into wide, level byways of pavers and concrete. The now completed project greatly improves visitor safety and accessibility, while reducing the damaging contaminants raised by thousands of visitors’ steps. In some off-trail locations deep inside the caves, park officials find as much as two inches of dust, hair, lint, bits of tobacco, threads and other foreign substances carried into the cave by humans. That sort of lightweight material never has a chance to disperse in the windless environment below ground.

While workmen pushed handcarts and wielded hand tools to rebuild the trails — no heavy machinery was allowed underground — Crothers and his team worked alongside, seeking rare and priceless prehistoric and historic artifacts preserved by the cave’s climate. Often the relatively slight disturbance of soil — in depths ranging from as little as three inches to as much as two feet — uncovered precious, long-lost artifacts

“It was the responsibility of UK archaeologists to monitor the digging and recover any historic or prehistoric artifacts that the construction work might uncover,” said Crothers, who helped oversee much of the work along the two-mile Historic Tour trail.

One of the most fascinating sites along the historic trail, the saltpeter mining operation was first established in the 1790s to enable the manufacture of black gunpowder, a precious, rare commodity to the pioneers on the far western edge of the American frontier. Huge wooden pipes and vats were hewn from the surrounding forest in 1809 for an expanded mining operation that would provide saltpeter to the American military as the War of 1812 approached. The end of the wars on American soil by 1815, however, caused the demand and the price for Kentucky saltpeter to plummet, and brought an abrupt end to the commercial mining of caves.

“We felt incredibly privileged to return to the caves and continue the process of preserving that unique site,” Crothers said. “Naturally decomposing items, like wood, animal hides and cloth, simply don’t deteriorate as much in the constant temperatures and humidity of a deep cave. However, with increasing human traffic we found some artifacts were now threatened.”

A treasure trove of more than 200 historical artifacts, some as much as 200 years old, have been recovered, documented and preserved; most of those objects were restored for public view in situ along the public Historic Tour trail. To preserve the items, researchers used a solution of borax salts to treat the huge wooden pipes, pumps and leaching vats. The borax salts will repel bugs and decay for decades with no harmful residue.

Although Crothers estimates that 80 to 90 percent of the 200-year-old saltpeter mining equipment and fixtures are still inside the caves, not all of them can be found where the centuries-dead miners left them.

“When they started building public trails about 150 years ago, instead of chopping down more trees in the surrounding woodlands, they used what wood they found at hand, inside the cave. They used that perfectly seasoned wood from the mining operation to make handrails, benches and other amenities for guests. Now, we have only one damaged pump left in the cave, but it will still give visitors a sense of the importance of Mammoth Cave to the prehistoric natives, to the American frontier, and to us today, ” Crothers said.

Crothers and his team took more than 3,000 photographs and countless drawings to record their work. Some of those images may be available for public view later this year. With the anniversary celebrations planned this summer, two miles of extensively refurbished underground trails plus more than 200 restored ancient and historical artifacts will allow even experienced visitors “to see the caves in new and exciting ways,” said Crothers.